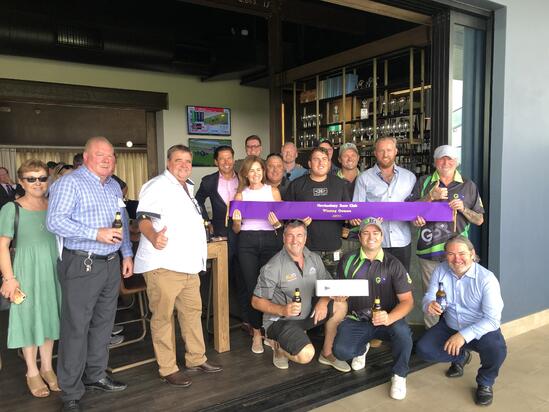 PETER Green is a firm advocate of Inglis’ annual Scone yearling sale – and it’s easy to understand why!

The Hawkesbury trainer and his racing manager brother Clint have had success with a number of “cheapies” bought at Scone; another being added to the list today.

Spanish Fighter ($15) made light of his lengthy absence from the track by overhauling hotpot Green Kudos ($1.40) to land the Pink Finss Charity CG&E Maiden Handicap (1100m) on his home course.

Vigorously ridden by Grant Buckley, the lightly-raced three-year-old maintained a determined gallop down the centre of the track to nab the favorite in the shadows of the post.

A gelded son of Bull Point, Green Brothers Racing picked up Spanish Fighter for $6000 at the 2019 Scone sale.

“Not being a big stable, the Scone yearling sale is attractive to us,” Green said this evening.

“It gives us the chance to buy cheaper horses, and bring new owners into the industry for not a lot of money.

“At the same time, they can have plenty of fun and roared the house down today.”

Green explained Spanish Fighter was part of a “double deal” arranged by his brother.

“Clint bought two yearlings in succession (Lots 164 and 165) at that 2019 Scone sale and then syndicated them.

Spanish Fighter shed his maiden status at only his fourth start – but his first since contesting the Inglis Challenge (1100m) at Scone last May (that race was won by The Bopper, who cost $30,000 at the same Scone sale as Green’s horse).

He had been placed at Wyong at his previous start before going to Scone.

“I gave him a break after the Inglis Challenge, but he went shin sore when I put him back into work,” Green said.

“Spanish Fighter isn’t big, so this time I have been getting a lighter rider in Ashleigh Borg to partner him in his work.

“He trialled well when second over 800m at Hawkesbury on January 25, and I expected him to run a good race.

“But being his first start since last May and the fact that the 1100m was probably going to be too short as I’m sure he will be better when he gets to 1600m, I didn’t expect him to win.

. Green, an experienced horseman who has been involved in both thoroughbred and harness racing from both sides of the fence, has 14 horses in work at Hawkesbury.

Spanish Fighter was his second winner this season; My Little Racer being his first at Orange on October 6 last year when Buckley was also aboard.