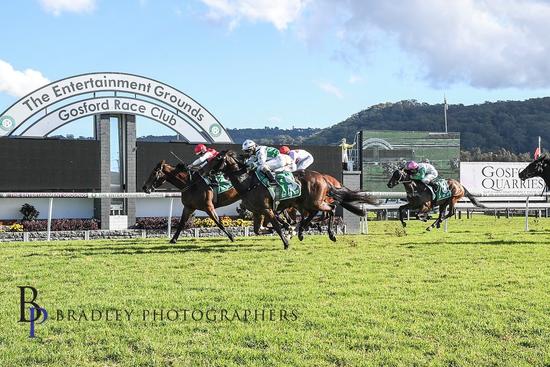 TUESDAY: June 30, 2020: HAWKESBURY trainer Peter Green had a candid explanation for the naming of his $151 winner Flatout Elle at Gosford today.

The three-year-old filly, partnered by apprentice Cejay Graham, nabbed another roughie, $51 shot Aunt Belle, on the post to land the 3YO Maiden Handicap (1600m) at only her fourth start.

“She has long legs and a slim body, the same as Elle Macpherson (the famous Australian model), that’s how she got the second part of her name,” Green explained this evening.

“All our owners suggest a name and Peter Cook (no relation to the former champion jockey) came up with the first part because of his Flatout Fencing business.”

Flatout Elle’s famous namesake probably didn’t even know she was racing, much less scoring at bolter’s odds, but it didn’t stop the Hawkesbury filly putting her name amongst the longest priced winners of the season.

Apprentice Graham settled Flatout Elle in fifth place, started a run on the filly approaching the home turn and in a deceptive finish managed to snatch victory from Aunt Belle on the line.

Green’s brother Clint, who has a knack of finding winners at bargain prices, secured the Shamus Award filly for only $2500 at the 2018 Scone yearling sale.

She is the second foal of the aptly-named but unraced Astronomer Royal mare Intergalactic.

Coincidentally, runner-up Aunt Belle also was offered at the same Scone sale, but was passed in at $10,000.

Whilst Green, who has notched four winners this season (and Cejay Graham has ridden three of them), didn’t go to Gosford expecting a shock result with Flatout Elle, he wasn’t totally surprised either.

“She should have finished closer, third or fourth, when sixth at her last start at Hawkesbury in a Maiden Plate (1800m) on May 21 as she didn’t get clear running,” he said.

“Her work has improved the last couple of weeks and though I didn’t expect her to win, I thought she would run a race.”

Flatout Elle certainly has been a work in progress. Green trialled her on no less than seven occasions between April last year and January this year before taking her to the races.

“She hasn’t been a great eater and has had a few niggling issues, but nothing bad,” he said.

“I have had to be patient with her.

“Cejay has ridden her only twice; the first when she ran second in a Rosehill trial on January 28.

“She drove her along that day and she responded and she did the same today.

“I feel the filly will handle longer than today’s 1600m.”

Green, an experienced horseman who earlier drove and trained standardbreds and also worked as a harness racing steward before taking out his thoroughbred licence only a few years ago, recalled driving a couple of winners around the 100-1 mark, but never trained one at such odds.

. Flushed with the Gosford success, Green and his racing manager brother Clint (Green Brothers Racing) will be on the lookout for another bargain at the combined Inglis Australian Yearling Sale Round 2 and Scone Yearling Sale on Sunday.