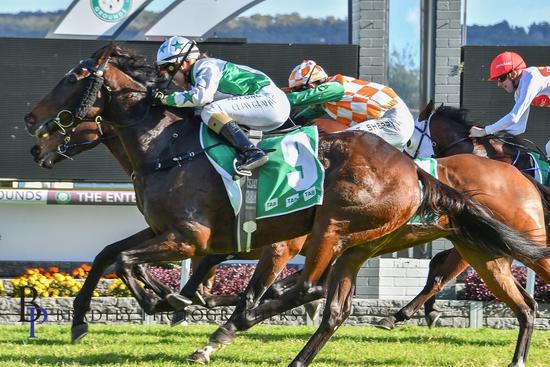 Well done to anyone who found this result at Gosford as Flatout Elle led home a shock quinella in the 3YO Maiden Handicap.

The Shamus Award filly had been flat out keeping up with her opposition in her first preparation of racing, having not finished within seven lengths of the winner in her three runs.

She entered Tuesday's maiden off a six-week freshen-up after a 13.5L defeat at Haweskbury, and as such the Peter Green-trained filly was sent around at $151 with many of the bookies while she had a starting price of $270 with Betfair.

Punters zeroed in on the Gai Waterhouse and Adrian Bott-trained Star Of Success, who firmed from $4.60 into $2.50.

However, favourite backers knew they were in trouble a fair way from home with the Exceed and Excel gelding under hard riding before the turn.

With the favourite out of play - eventually coming in last in the nine-horse field - it was left to a couple of roughies to fight it out.Aunt Belle, a $51 chance for looked set to take victory before Flatout Elle made a lunge on the line under Ceejay Graham.

It was Flatout Elle who got the photo, with an official margin of 0.03L.

The winner cost just $2500 at the Inglis Scone Yearling Sale and has now collected over $23,000 in prizemoney.

Miss Keira at $4.80 finished a long-neck away in third.